After initially dissing it, I’m drinking the Pownce Kool-Aid. Is it the end-all, be-all? No, and it has a long way to go. But it’s actually come in very useful. Here are 5 reasons why it kicks Twitter’s ass:

2. It’s not about profiles, bands whoring themselves, pictures or number of friends. ‘Nuff said.

3. Matt Mayers says it’s better. Matt’s a young techie/programmer/anime guy in our office. He doesn’t cheerlead Web 2.0 stuff unless it works and is cool. And anyone knows after watching failed programming languages that it’s the techs are the ones that have to embrace them. It’s not the only key to success but availability of code and community developing in that code typically is your first step to success.

4. Groups. If I want to group, say, co-workers together, I can do that and share files with just co-workers, or create another group to share pr0n mp3s other stuff with.

5. How often do you get to deny JesusChrist as a friend but still keep him as a fan? 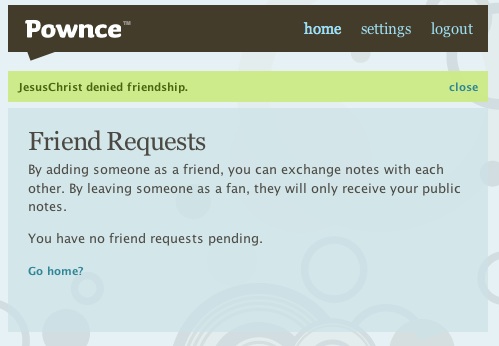 P.S. I have a few invites left. Email me if you’d like one – first come, first serve!

Manage Cookie Consent
To provide the best experiences, we use technologies like cookies to store and/or access device information. Consenting to these technologies will allow us to process data such as browsing behavior or unique IDs on this site. Not consenting or withdrawing consent, may adversely affect certain features and functions.
Manage options Manage services Manage vendors Read more about these purposes
View preferences
{title} {title} {title}