As you know, the FTC recently published “blogger” and celebrity guidelines around disclosure. And, the most simple terms, it said that people should be able to discern whether or not you’re being compensated for talking. 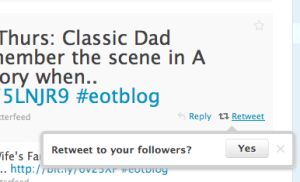 No room for disclosure

On a parallel track, Twitter recently changed how their functionality works. Specifically, the common practice of re-tweeting, or saying what someone else said, has caused pains for a lot of users. In particular, the technology Twitter’s using doesn’t allow the original Twitterer to see that someone re-posted their content. Not a big deal, however for those of us looking to retweet client work are in for a bit of an education.

See, the current re-tweet function that is built in to the new interface just asks if you’d like to retweet something without the ability to post edits – or add disclaimers or disclosure. If I visit a client’s Twitter account or want to retweet something that is beneficial to a client, I have to manually cut and paste the tweet and re-type their username in order to meet FTC requirements of full disclosure.

Perhaps this functionality is something Twitter will allow or introduce . Either way the platform and FTC guidelines create a challenge for those of us looking to comply and will pose the question – will there be exceptions based on the actual use of each platform? For now it’s looking like we just need to be more careful and not use Twitter’s built in RT functionality.

BusinessWeek Lays the Smack Down on "Social Media Experts"Previous Article